Men Explain Things to Me by Rebecca Solnit 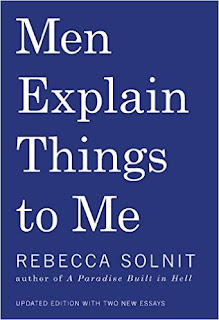 Rebecca Solnit is the author of 15 books, among them Men Explain Things to Me, as well as essays and atlases.  The tagline on the home page of her website describes Solnit as "writer, historian, and activist."  Men Explain Things to Me is a slim volume of essays including the essay that lends its title to the volume.  I don't remember where or how I first came across Men Explain Things to Me, but it has been on my to-read list for quite a while.  It begins with the essay of the same title which is a deep exploration of the phenomenon now popularly referred to as "mansplaining."

The essays in this collection explore a number of ideas that share a common theme: society's silencing of women in a multitude of ways.  There is the silencing of women's voices through social mores ingrained in women from childhood through adulthood that condition the devaluation of the female voice.  Solnit also traces much of the violence that men commit against women to the patriarchy's need to control women in that violence and murder are the ultimate silencing of women.  Solnit also writes that although the root of violence is gendered (i.e. perpetrated overwhelmingly by men), this fact is often overlooked and seldom studied.  If a major risk factor for violence is not even acknowledged, how can society as a whole address it in an effective manner so as to eradicate it?

Solnit's essays are well-researched with statistics and facts to back up her positions.  And this collection is a thought provoking and empowering volume.  It is deeply engrossing and highly readable.

Popular posts from this blog

November 03, 2010
I'd previously read John Sandford's first Virgil Flowers novel, Dark of the Moon , a few years back and found it to be a quick, well written read.  Recently I discovered he has since written three more Flowers titles and decided to start with the second title and read through to the fourth and most recent one.   Heat Lightning is the second Flowers installment.  The darkness of the crimes committed that must be solved in the novel are leavened by the lighter presentation of Flowers and the story.  It works well together--a dark crime doesn't always need dark prose to back it up. Virgil Flowers is Lucas Davenport's go to man in the Minnesota Bureau of Criminal Apprehension when there's a sensitive, tough or otherwise puzzling case to solve.  Flowers has a high clearance rate and can often turn around a case in about a week.  This  particular case is especially perplexing with quite a few red herrings thrown into the mix to throw everyone--Flowers and the reader in
Post a Comment
Read more

March 14, 2017
Frozen Charlotte is the third novel written by Alex Bell who has seven books to her name, some of which belong to the horror genre.   Frozen Charlotte , a young adult novel, is a creepy, strange, mysterious ghost story.  It is a terrifying read for much of the novel especially once the reader intuits just what is actually afoot regarding one of the characters. Following a frightening and bewildering incident with a ouija board cell phone app in a cafe, Sophie's best friend, Jay, drowns in a freak biking accident on the way home.  Dealing with her grief over Jay's death and determined to find out exactly what happened that night, Sophie travels to the Isle of Skye to stay with her uncle and cousins, Cameron, Piper, and Lilas, over vacation while her parents go on a long planned trip to California.  By the end of the novel this inciting mystery will be eclipsed by the story of the disturbing evil that is source of the nail biting horror. Sophie fears she and Jay unleashed
Post a Comment
Read more

December 22, 2014
I'm a sucker for a Hallmark Christmas movie.  Okay, really, I'm a sucker for any Christmas/romantic comedy type TV movie (ion TV channel also has their own Christmas movies and Lifetime TV channel does as well... don't ask me how I know this; I just do).  However, I don't normally read Christmas themed novels.   Winter Street might be the first one for me.  But it's an Elin Hilderbrand novel, and we all know I love her books.  This is the sixth novel by Hilderbrand that I've read and the fifth that will be reviewed here on the blog.  Previously I've read and reviewed The Matchmaker , Silver Girl , Beautiful Day , The Island , and The Castaways .  You can click the links to read those reviews.  I've enjoyed them all, and I do recommend you try them out.  I've also read Summerland , but I didn't review it.  For some reason, I just didn't like that one so much.  But I have a lot to say about Winter Street . At its core, like some of Hilderb
Post a Comment
Read more